Five-year gift to Joseph Arboleda-Velásquez, MD, PhD, enables further investigation of potential genetic resistance to Alzheimer’s as he works toward an ultimate goal of developing treatments. 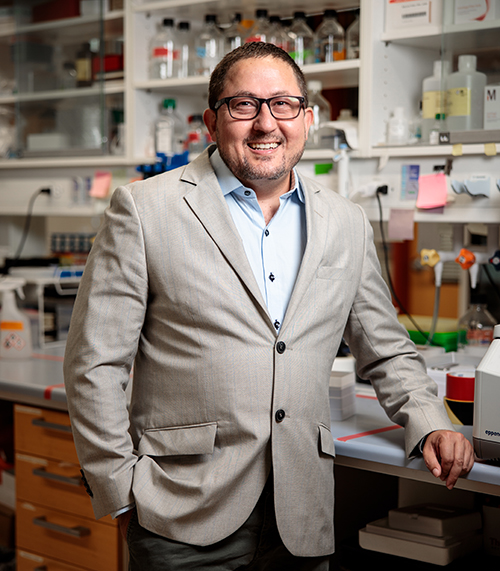 Boston, Mass. — Joseph F. Arboleda-Velásquez, MD, PhD, an Assistant Professor of Ophthalmology at Harvard Medical School and assistant scientist at Massachusetts Eye and Ear who studies small vessel disease in the brain and the eye, has been awarded a five-year, $4 million gift from Good Ventures to spur his lab’s groundbreaking work into Alzheimer’s disease genetic resistance.

This transformational gift will enable Dr. Arboleda-Velásquez to build upon the recent discovery of a genetic mutation that protected in a woman who had a high familial risk for the condition and amyloid plaque deposits in her brain against early-onset Alzheimer’s disease.

The gift funds will support two research projects that aim to:

In November 2019, Dr. Arboleda-Velásquez and colleagues at Mass Eye and Ear, Mass General Hospital, and the Neuroscience Group of Antioquia, Colombia reported in Nature Medicine identification of a genetic mutation of the APOE gene – the major susceptibility gene for late-onset Alzheimer’s – in an older woman who did not develop the disease despite her strong family history. The researchers hypothesized this genetic mutation may have provided protection against the devastating neurological illness.

“By agreeing to participate in research, one woman opened the door for a groundbreaking discovery to happen, and that action really showed our research team the power of one,” said Dr. Arboleda-Velásquez. “Good Ventures did the same through the organization’s generosity, and are making a huge difference to help us reach the next step in this discovery.”

The rare genetic variation linked to Alzheimer’s protection, called, APOE3 Christchurch (APOEch), was identified in one woman who was part of the Mass General Colombia-Boston Biomarker Study (COLBOS), which follows individuals from Colombia at the highest risk to develop early-onset Alzheimer’s disease due to a E280A mutation in a gene called presenilin 1 (PSEN1). This woman, however, did not develop mild cognitive impairment until her late 70s, about 30 years later than other genetic carriers in the study. Imaging tests showed she had unusually high levels of amyloid plaque deposits in the brain, which are telltale markers of Alzheimer’s, despite not showing symptoms. Dr. Arboleda-Velásquez and colleagues’ genetic analysis revealed that this woman carried two copies of APOEch.

With the new funding from Good Ventures, Dr. Arboleda-Velazquez and colleagues in Colombia will accelerate this work and examine this family line for other possible genetic mutations that may provide disease protection. They believe that their genetic will lead to the discovery of related drug and gene therapies for Alzheimer’s.

The research team at Mass Eye and Ear first became interested in this genetic variant when they were investigating genetic mutations linked to protection against age-related macular degeneration (AMD). This neurodegenerative eye disease, which shares some commonalities with Alzheimer’s disease, is a leading cause of blindness in people over 50.

In 2000, Dr. Arboleda-Velásquez earned his MD in General Medicine, graduating class valedictorian, from the University of Antioquia, in Medellin, Colombia, where he worked extensively with individuals who had familial Alzheimer’s disease and stroke. In 2009, he received his PhD in Cell and Developmental Biology from Harvard Medical School.

About Mass Eye and Ear

Massachusetts Eye and Ear, founded in 1824, is an international center for treatment and research and a teaching hospital of Harvard Medical School. A member of Mass General Brigham, Mass Eye and Ear specializes in ophthalmology (eye care) and otolaryngology–head and neck surgery (ear, nose and throat care). Mass Eye and Ear clinicians provide care ranging from the routine to the very complex. Also home to the world's largest community of hearing and vision researchers, Mass Eye and Ear scientists are driven by a mission to discover the basic biology underlying conditions affecting the eyes, ears, nose, throat, head and neck and to develop new treatments and cures. In the 2020–2021 “Best Hospitals Survey,” U.S. News & World Report ranked Mass Eye and Ear #4 in the nation for eye care and #6 for ear, nose and throat care. For more information about life-changing care and research at Mass Eye and Ear, visit our blog, Focus, and follow us on Instagram, Twitter and Facebook.

The Harvard Medical School Department of Ophthalmology is one of the leading and largest academic departments of ophthalmology in the nation. Composed of nine affiliates (Massachusetts Eye and Ear, which is home to Schepens Eye Research Institute; Massachusetts General Hospital; Brigham and Women’s Hospital; Boston Children’s Hospital; Beth Israel Deaconess Medical Center; Joslin Diabetes Center/Beetham Eye Institute; Veterans Affairs Boston Healthcare System; Veterans Affairs Maine Healthcare System; and Cambridge Health Alliance) and several international partners, the department draws upon the resources of a global team to pursue a singular goal—eradicate blinding diseases so that all children born today will see throughout their lifetimes. Formally established in 1871, the department is committed to its three-fold mission of providing premier clinical care, conducting transformational research, and providing world-class training for tomorrow’s leaders in ophthalmology.